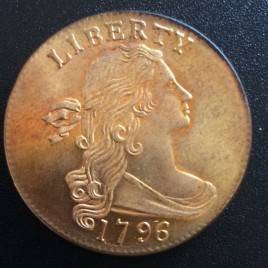 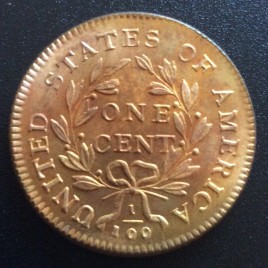 Fairly nice counterfeit purchased directly from China in 2014. Dimensions are within tolerance levels for the period. The main problem is the wire rim on the obverse. Since large cents were not struck woth a collar until the 1830’s, there would be no distinct raised end to the denticles. The edge also shows evidence of being struck with a collar.

Also, the obverse is struck to a much lower relief than genuine examples, making flat areas in the lowest portions of the devices (such as hair, drapery, etc.) that are not normally there. This is characteristic of cheap fakes from this factory.