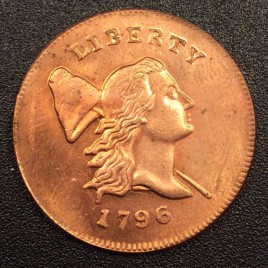 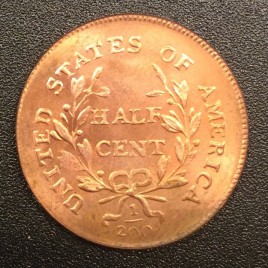 Here is a fake of the extremely rare 1796 With Pole half cent. It is easily identified by its wire rim, which would not exist on genuine examples since genuine examples were struck without a collar. Also, there are hundreds of polishing lines and toolmarks in the obverse fields, and the numerals in the date look cartoonish.

On the reverse, the bottoms of the two zeroes in the 1/200 fraction are very weak. Lastly, the wreath is far too open at the top because it is missing the topmost two leaves, which can easily be seen when compared to a genuine example: