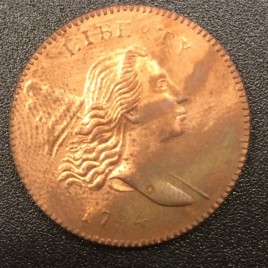 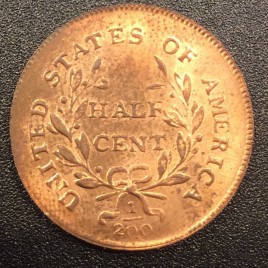 Here is a nice fake of a 1794 half cent. The denticles are not the right style nor the right size for the issue, and they are spaced too far apart. This counterfeit is struck in a lower relief than genuine examples, which causes flat areas in between all of the hair strands. Also, the top of the B in ‘Liberty’ is missing, which is not evident in genuine examples

This counterfeit displays a plain edge, while genuine examples have lettered edges that read: ‘TWO HUNDRED FOR A DOLLAR.’

On the reverse, the bottoms of the two zeroes in the 1/200 fraction are very weak. Lastly, the wreath is far too open at the top because it is missing the topmost two leaves, which can easily be seen when compared to a genuine example: