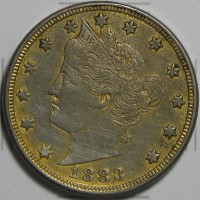 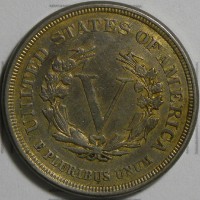 The specimen here is an example of a Contemporary Racketeer Nickel that was made with gold leaf and without a reeded edge. The leaf has been worn off in circulation from the devices and broad portions of the fields.

What is a Racketeer Nickel?

In 1883 there came a change in the design of the nickel, displaying a 5 in roman numerals (“V”) on the reverse. However, there was one important omission: There was no indication of the denomination. Since its diameter was so similar, a number of enterprising individuals immediately exploited this fact by gilding them (even sometimes reeding the edge) and trying to pass them off as $5 gold pieces. The finished product was an altered coin known as a “Racketeer Nickel.”

However about 85 years later in the 1960s, Racketeer Nickels had a surge in popularity when an urban legend surfaced about one such racketeer — a deaf mute — by the name of Josh Tatum. Legend had it that he would gold plate and reed V nickels and go into various shops to purchase 5 cent cigars, hand over one of his creations and, if the shopkeeper thought it was a $5 piece, collect his $4.95 in change (quite a large sum back then). The legend goes on to say that he was arrested and tried, but the case was dismissed as since he was mute he could not actually claim his pieces were worth $5 in the first place. The last part of the legend claims that this is where we get the idiom “You’re Joshing me” from.

Even though it’s likely there was no “historical” Josh Tatum, the popularity of his story actually drove modern entrepreneurs to obtain 1883 “No Cents” Liberty Nickels, electroplate and/or reed their edges and pass them off as “genuine” Racketeer Nickels (in other words make counterfeits of counterfeits!). However, there are several things that you can look for that indicate whether a gilded V Nickel is a contemporary or modern creation.

Contemporary Racketeer Nickels were generally plated with gold leaf that has been actually worn off of the high points of the devices as they did indeed circulate. Looking at the gaps between the devices under a microscope will show remains of the leafing structure and even places where small fibers have stuck to the exposed adhesive over time as well as no gold in the recesses of most of the scratches on its surface (i.e. it was gilt early in its life, rather than after it circulated for decades). Not all Contemporary Racketeer Nickels were reeded (however most were), but if they are reeded, the reeds show appropriate wear as well with gold still in the recesses. Gold electroplated Contemporaries are rare as the gold electroplating process was still very expensive.

Modern Racketeer Nickels are generally either electroplated (which leaves a very shiny, almost toy-money surface) or coated in a gold detailing wax (such as “Rub-N-Buff” or similar products) which rubs off on your fingers or a piece of paper and smells slightly of petrol. Most “mass produced” Moderns are made from lower-grade V Nickels (G4 to F12) with absolutely no wear on the golden surface. Additionally, most mass-produced Moderns are not reeded, but those that are have very crisp reeds with little indication of wear.

Sometimes there will be Modern Racketeer Nickels that were made with care from higher-grade coins that are much more convincing. These are easier to tell apart under the microscope due to how they wear, as well as the materials that they’ve used (as modern gold leaf is rather different from what was used in the 1800s).